They say that you can’t teach an old dog new tricks, are they right? They are partly right. An older dog will take a heck of a lot more training and dedication from its handler than a younger dog will, basically because an older dogs mind is a lot more “set” in its ways. An older dog will have passed that crucial period in its life that influences what the dog will behave like when it is older, therefore it already thinks it knows how to behave and trying to teach him other ways to behave can take a lot of time and effort. 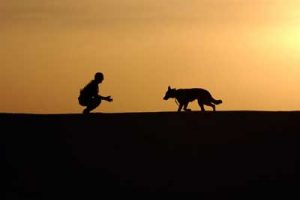 It is not impossible but you can’t train an old dog like you train a puppy. You have to be a little bit stricter on an older dog because they have a lot more intelligence than a puppy and know how to drive you round the bend. An older dog will more likely do something if he thinks its his idea rather than yours, for example if he goes to sit , say sit and then praise him, he will think it was his idea and if you keep on repeating this process sooner or later you will have him sitting on command. This process will work for many of the commands, like fetch, come, stay and heel.

In saying that you may find that your older dog is particularly easy to train, some dogs have a streak of stubbornness which means they do not train as easily as others but some are a lot more susceptible to training methods. Training an older dog will of course be difficult but bad habits need to be broken and long term habits need to be stopped. Your dog will thank you for it in the end and the end result will be well worth the trouble.

Training an older dog can be a grueling task but try making it fun by joining a class (they are not just for people with puppies) or try to get some support from family or friends, invest in some training products like toys and treats, or even go as far as a training school, but one thing is for sure once you’ve taught your dog what he needs to know the bond between you will grow and you will become inseparable.