On taking a new puppy into your house, you can follow this step-by-step process. There are nine steps in the process of house training outlined here. Being consistent and persistent in the house training process are of great importance if you are going to be successful.

1.The right size of dog crate is vital. Make sure you get one before your puppy arrives. This means it should be big enough so your puppy can turn around in it and lay down in it but not much bigger than that. A puppy’s instinct is to not soil his den and the crate will become his den. If he can sleep on one side of the crate and have enough room for a toilet area at the other side, he probably will. Don’t be surprised! 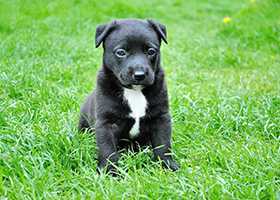 2. Make sure you are free for at least two days, so that you can remain with your puppy. He’s going to need taking outside a lot to begin with – from every half an hour to every hour.

3. You may need to restrict your puppy’s access to selected areas of the house until he is house trained.

4. There are certain times when he will predictably require taking outside, so take him out at these times: when he gets up in morning, when he awakens from a nap, after he’s been exercising (for example, playing hard), after each meal or drink and before he goes to bed at night.

5. When he arrives you are going to need to take him outside every half an hour to hour minutes, until you learn to recognise the signs that he needs to relieve himself. The signal may be sniffing, circling or backing up.

6. Once you see the signs that he wants to relieve himself, you must take him outside at once and wait until he does his business.

7. When he does his business, immediately give him lots of praise and attention.

8. If you need to attend to other matters, you could leave the puppy in his crate for up to an hour. You should always do this if you cannot pay full attention, at least until he is well house trained. But you must firstly lead him to be content to remain in his crate. In order to do that you need to develop a positive association with the crate for him. Give him some small treats near the crate and tempt him inside gradually. Once he’s been in a few times, shut the door very briefly and then open again. Gradually increase the time with the door shut. You can also put an interactive toy or a dispensing toy in the crate to keep him occupied.

9. If he does his business in the house, just ignore him when he does it but be sure to clean it up and clean the area thoroughly with an enzymatic cleaner or hot biological washing powder solution. If you just clean normally, some scent will remain and your puppy will be tempted to soil the same area again.