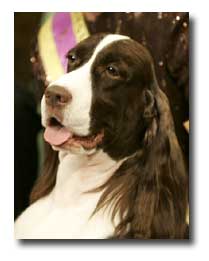 At the arena where the New York Knicks play, James celebrated with a few loose rebounds. Handler Kellie Fitzgerald said he did not eat before the show; once it was over, he snacked on goodies that fell on the floor.

Dressed in a glittering copper top that perfectly matched her brown-and-white pet, Fitzgerald cuddled her champion. She said it was a coincidence that her outfit coordinated with her dog’s coat.

James beat out a pair of white poodles and a petit basset griffon vendeen, plus an Akita and a Bouviers des Flandres that pitted a husband and wife against each other. Larry Fenner handled the Bouviers and Laurie Jordan-Fenner guided the Akita.

This was his 51st best in show victory, and his last. He’s retiring from the show world to live the life of a therapy and obedience dog.